If you are just starting to develop your new product or you have some legacy software, and you are wondering what is the best way to have a modern, up-to-date software product, this blog is just right for you.

React to the Rescue

React (also known as React.js or ReactJS) is a JavaScript library for building User Interfaces (UIs). It was developed by Facebook and initially released in 2013. It is free and open-source and has a really big community of developers.

Let’s look at the best features of React.

React helps us build complex and interactive UIs. And what are User Interfaces built from? They are built from smaller blocks of code, which are basically components. React is all about components. Every component has its own logic and can be a view or a part of a view. Components can be reusable. Reusability is very important for having a clear and easy to maintain architecture.

DOM or the document object model represents the tree structure of the document – in other words, is the skeleton of an application. DOM manipulation is a key part of the web, but it is slow. React offers a solution – Virtual DOM.  Virtual DOM is a virtual representation of the ‘real’ DOM. It has a lightweight memory algorithm that keeps a replica of the DOM in the virtual memory. In this way, when something changes, only the components that are affected update. As a result, the virtual DOM makes the application faster.

React provides a one-way data flow. This gives a parent-child relationship and the data is passed from the parent to the child component. In this way, developers have better control over the application. In need of a future modification, only a part (a child) can be changed without worrying about breaking the whole application down.

JSX (JavaScript XML) is a syntax extension of Javascript, similar to HTML. It describes how the view should look in a simple way without having to maintain a complex Javascript DOM structure.

React Native is a Javascript framework for writing native mobile applications for IOS and Android. It combines native development with React.

Why Choose React for Your Software Product Development?

React gained its place as the most popular Front-end framework in the past few years. Compared to Angular and Vue.js, React holds more than 50% of recent downloads and searches. 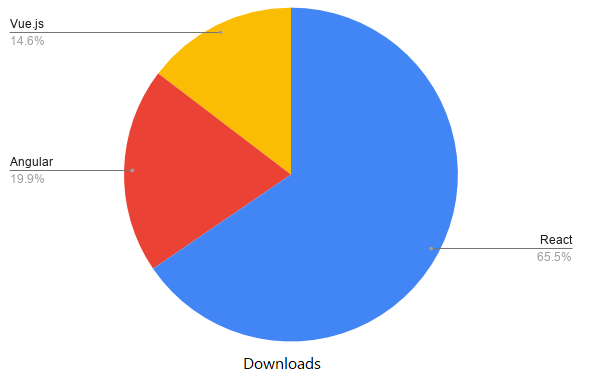 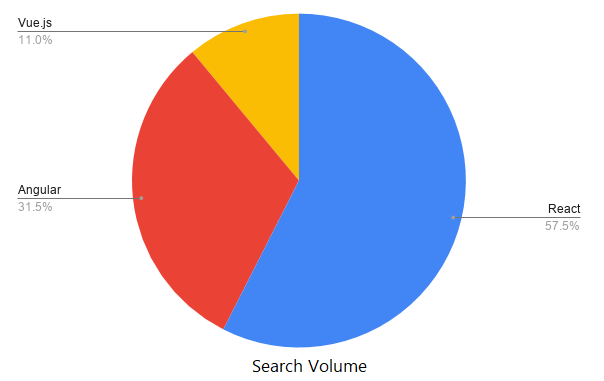 React is known to have a better performance than the other Front-End libraries and frameworks out there. As we stated, React uses the Virtual DOM to provide a faster way of updating the view in a web application. In addition, React can handle rendering huge amounts of data. Here comes the question: What if I have to render a huge amount of data? Don’t worry, React can handle it. A lot of popular applications chose React because of its performance. For example, Netflix uses React in their Web and mobile applications to smoothly render content without lag. They even wrote a blog post about how they optimised their startup speed, runtime performance and modularity with React.

React provides a lot of tools for easy and fast debugging. Using the power of JSX, and the separation of reusable components, developers can easily find and fix problems within the source code.

There is a large community behind React. A lot of people are contributing every day to make React better. This is useful because you can always rely on finding an expert solution to a given problem.

Having React for a Web application makes it easier to build native mobile applications. As we already mentioned, React Native is a framework for building native IOS and Android applications. With this approach, parts of the web application can be used in the mobile apps, which will reduce the get-to-market time.

The Search Engine Optimization, a.k.a SEO, is the best way to reach people for any online business. React is SEO-friendly. It has a quick page load and fast rendering speed that helps your product to get a higher rank on Google.

Online Products made with React

React has the power to build dynamic applications for different environments. It’s 8 years old and already used by some of the giants of the online business.

The first one to think about is Facebook. About 10 years ago, Facebook already had millions of users. Аdding new features to the already complex source code became really challenging. On the other hand, management of Facebook Ads, which is one of the primary sources of income for the platform, became difficult. About this time, Facebook decided to create a front-end library to optimise their development process, and in 2013 they launched ReactJS. Since then, most of Facebook’s products are written in React (Facebook, Instagram…).

The things that all of these have in common is the fast responding time, processing of tons of data, modern UI and UX and millions of users, thanks to React.

As we already stated, React offers a great solution for small- and big-scale software projects thanks to the thriving online community and constantly growing technical libraries. We at Dreamix have had the opportunity to work on multiple React projects, and our developers already have hands-on experience with the library and would be happy to partner with you on your next business project.

Home » Why Choose React for Your Software Product Development?